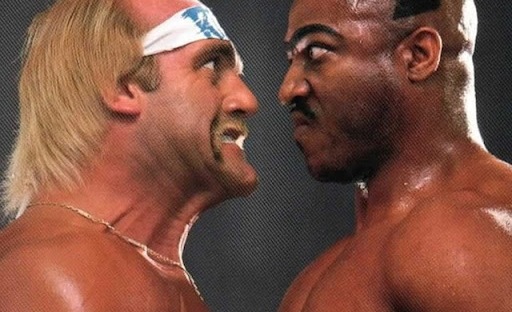 I haven’t done that many movie reviews here but sometimes I come across one that is just plain crap, and I mean so epically god awful that it makes you wonder how it ever got made in the first place. From the wardrobe, to the acting, to the horrid dialogue, some films just have the ability to drive you into a concussion by the sheer impulse it instills to bash your head against the nearest solid object. Such is the case with 1989’s No Holds Barred, the first attempt to give Hulk Hogan his own starring role after his appearance as Thunderlips in Rocky III seven years earlier. It’s a cheesy romp that’s ridiculously premised and carried by a lead that has no business anywhere near a feature film, and in short, it’s gloriously terrible in everything it does and I friggin love it.

No Holds Barred follows Rip, who can’t be bothered to be given a last name in the movie because he’s just so badass (it’s Thomas which I’ve recently come to discover). See, Rip is the World Wrestling Federation Champion, shocker, and draws in big television ratings for his network to put them number one in their time slot. Well, this irks the crap out of the head of a rival station, Mr. Brell, who tries to bribe the champ into jumping ship and coming over to his side. Seriously, that’s the backbone of the plot we’re dealing with, a pissed off T.V. exec who’s throwing a hissy fit because a wrestler is stealing all his viewers. Anyway, Rip is just so virtuous that he declines the offer, which is weird to see, because if history has taught us anything it’s that in real life Hogan would’ve snatched that cash up and run. Anyway, this prompts Brell to visit a seedy bar with a couple of his cronies where they hold unsanctioned wrestling matches, inspiring our loathsome villain to create his own wrestling program, Battle of the Tough Guys, to compete with Rip and knock him off the top.

Brell’s event ends up going off as a tremendous success, mostly due to the arrival of an unscheduled fighter, Zeus, a crazed ex-con who Rip’s trainer formerly mentored but was so unhinged he killed a guy in the ring. Naturally, Brell sees an opportunity and pushes for Zeus to challenge Rip, who at first declines the match but then Zeus manages to get a hold of Randy, Rip’s younger brother, and beat the ever-loving tar out of him. Of course, the champ then accepts but now with a grudge to settle, which leads to a standard Hulk Hogan vs big dumb heel match but only this time for a movie and not in a live wrestling ring. In the end, Rip triumphs and Brell is defeated, electrocuting himself after the champ downs Zeus for good. It’s all standard action stuff with wrestlers trying to be actors but not pulling any of it off in the least, but it’s absolutely hilarious at times and not because they wanted it to be.

Zeus, played by Tiny Lister, yes, folks, Deebo is in this movie, is actually a rather effective foil against Rip, as he doesn’t utter more than a few words and Hogan can barely speak them when he’s trying to deliver his lines. I’m not kidding here. When these two are on screen together it’s like a stare down of pure roided up testosterone, with an epic battle of chains and black denim vs spandex on the verge of erupting at any moment. The character of Brell is also played pretty convincingly by Kurt Fuller, who’s over the top rage fueled business exec is sadly the high point of the acting performances in the flick, which ain’t that great to begin with. A subplot I didn’t mention earlier includes Brell planting a female spy in Rip’s organization to seduce and manipulate him, but since he’s such a standup meathead, she just can’t help but fall in love with the big hunk. When I think about it, it’s incredibly creepy as hell, as the first time they meet in the film he practically eye rapes the crap out of this poor girl. I mean really, if it was a sexual harassment seminar he was attending he would have failed spectacularly, but it was the 80s, so different standards at a different time I guess.

I also mentioned the horrible dialogue a little bit earlier, and I feel I would really be doing the writers and filmmakers a great disservice if I didn’t at least touch on it, because my god, did they ever come up with some zingers. I mean some of the lines feel like they were written by Vince McMahon himself for a bad wrestling promo, and given that he was an executive producer, they probably were. There’s a scene where Rip literally scares the shit out of a guy, at which point the champ growls, “What’s that smell?” only to be met quivering reply of, “Dookie,” in return. And then we get a cameo appearance by Stan “The Lariat” Hanson himself, and holy crap is he ever a bright spot in this garbage fest.

He accosts Brell’s two lackeys in the restroom of the dive bar they visit, making to give them both swirlies in the urinals for them insulting him. He relents, however, once he gets a glance at their manly bits, remarking, “What do we have here? A teeny wanger,” and, “It ain’t even worth it.” If dick and fart jokes don’t have McMahon written all over them, I don’t know what does. Because even now, thirty-one years later, he still sees fit to jam them into his programming whenever he can, which is a big reason I don’t watch his trash anymore.

In all. No Holds Barred is admittedly low brow schlock, but it’s the good kind of schlock you can get together and watch with your friends and tear, or dare I say rip, into. The story is weak, the acting something that a high school theater troupe would be embarrassed by, and the script a horribly cringy mess, but it’s still a heck of a lot of fun. If you are, or were, a wrestling fan or Hulkamaniac then check this one, just don’t expect old Thunderlips to blow you away here anymore than he did in any of his other film roles, or matches for that matter, because it’s just not gonna happen. Go in expecting bad, but it’s a bad that we can all laugh at. Enjoy the show, gang. And Rip’em!

Published by The Remy Morgeson

Remy Morgeson is an independent author and avid lifetime gamer with a love for all things dark and fantastic. His works include the ongoing Chronicles of the Bear series and the upcoming novels Wreck of the Tiger and Rise of the Black Sun. Outside of the world of literature, he enjoys tabletop RPGs, retro videogames, and throwing down with some pro-wrestling. If you like what he has to say or are interested in learning more about what he does follow him here. https://www.facebook.com/Remy-Morgeson-Author-112435553574739/?modal=admin_todo_tour View all posts by The Remy Morgeson