Webcomics: The Up and Coming Otaku Darling

If you are an otaku with an active Facebook or Instagram account, chances are you get ads for different webcomics every once in a while. Some might make you wonder what you might have clicked on to add you to the list as a demographic. Then there are most likely some that intrigued you enough to click and give it a read, possibly even adding it to your subscribed list. 🤔

The kind of ads that pop up during my scroll… and I ain’t even mad. 🤷

You’d have to be pretty unobservant not to notice the climb in popularity of indie webcomics in the past few years. This trend is global, and with artists all over the world with their own unique art styles and storylines featuring their cultures, it can make discovering new webcomics an exciting venture. It reaches across all genres and audiences and at this point, there is a webcomic for just about anyone!

The first webcomics, according to some sources, appeared in the late 80s and started to boom into the 90s with the World Wide Web becoming a household feature. Soon enough, newspaper comic strips, which were once heralded king, stepped back as the webcomic stole the throne. They continuously grew momentum as they became more detailed into the turn of the century.

So, why are webcomics becoming so popular now?

What makes webcomics an increasingly popular venue for artists is definitely ease of sharing. Not too long ago, the opportunities for a comic artist were slim if not contracted by a newspaper or magazine. With the flexibility and technological advances of modern day resources, a webcomic artist can truly flourish with just as much freedom as their imagination will allow.

A great example of this comes from our very own John McCool, who created the cult favorite webcomic Bored at Work. Bored at Work is a slice of life following an unusual crew of characters – including a talking cat and a Satanist – working at a coffee shop, defeating boredom and typical chaos. This comic has origins that go waaaaay back (I’m talking pre-historic times from when we were kids bored at school in French class!) and about a year ago he decided to upload a few panels for fun on Instagram. Since then, Bored at Work has developed quite the cult following, ranging from amazing fan art from all over the world to fans who loyally follow on each of the platforms the webcomic is listed. 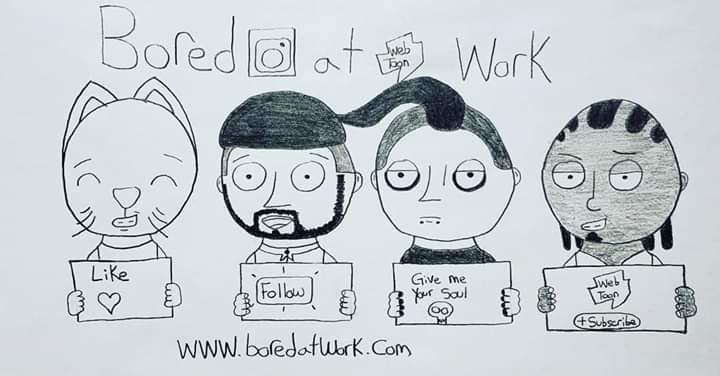 What do y’all think – are webcomics an active part of your otaku life? Which sites are your favorites? Be sure to comment and join the discussion, and drop the links to your own webcomics to spread the love! 🖤

***For all y’all nasties wondering about the “filth” in the screengrab above, this is from an advertisement for the Tapas webcomic The Duke’s Servant by Oh Yoon with art by A Chim.***